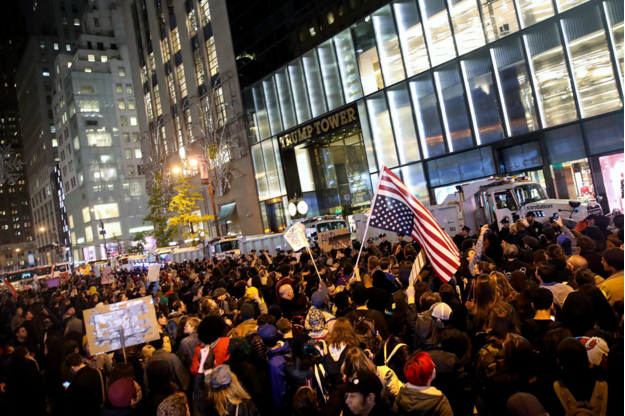 Two days ago, Donald Trump was elected to become the 45th president of the United States. As it stands right now, he is merely the president elect as President Obama has until January 20 before his term ends. Though the above is true, the nation has come out in swarms to protest the results of the election.

November 9, thousands of protesters gathered across the country to band together to express their dislike of the president elect Trump. People from Boston, Los Angeles, New York City, Washington D.C., Chicago, Des Moines and Austin, being the most notable, gathered to protest Trump’s victory. These protesters were mostly millennials. The protests consisted of non-violent acts of protest; however, there are reports of property damage via climbing on stop lights and spray-painting busses. These protesters gathered together and chanted things such as, “Love Trump’s Hate,” “Donald Trump has to go,” “New York hates you,” “We reject the president elect,” “Thank you Obama,” “F*** Donald Trump” and “Not our president.” Protesters also burned the flag, the Stars and Stripes, in protest of Trump winning.

I’m sorry, what? What on earth people? I understand that you do not like the results of the election. You are fully entitled to not like the outcome, but holy cow! Six capital cities had droves of people come out to express their hatred (I feel that I am not exaggerating by using that word) towards Trump. Multiple city blocks were filled! People broke through police barricades! In my mind this goes a little too far for me. First of all, I highly disapprove of anyone burning our country’s flag for a multitude of reasons (its history and the the men and women who fight to keep it safe to name a few). Yes, I am aware that it is legal to burn the flag, but that is a completely different story in my mind. So number one is that burning the flag is taking things too far for me, number two is that the group has gathered and made themselves look like fools in my opinion. Why? Because all you are doing to protest the election outcome is throw around hate speech towards something you can not change. Period, end of story. I am hoping that all of these people were people who voted. If not, what basis do you have on to protest a Trump victory? You did not make your voice heard through the ballot box, why should we listen to you now? The states have voted, you as protesters have voted (hopefully), I have voted, and the country says it wants Trump. Guess what? That means we get Trump.

I guess my biggest question here is why? Why are you doing this? I get it you don’t like Trump, but do you honestly think shouting things like “F*** Donald Trump” is going to change anything? I am generalizing here, but my guess is that majority of these people are non-Republican party members. Guys, you had your chance to put someone in office and the rest of the country disagreed, whether it was Jill Stein, Gary Johnson, Hillary Clinton or who ever, it does not matter. You lost. I am not bragging, I am stating the truth. What does that show to the people of the world, or better yet those who can not vote yet? If you through a big enough hissy fit you’ll get what you want? That is not how the world works. Same goes for the Facebook feeds about how everyone thinks we are going to die since Trump won.

Look, I am not here to be the conductor of the Trump Train and make you like him. To tell you the God’s honest truth, I would have much rather of voted for someone like Ben Carson or Ted Cruz, someone with a little bit better head on them. But the fact of the matter still remains, Trump won, he is our president elect and will be our 45th president. There won’t be a revote; there won’t be some last minute scandal. That’s it. End of story.

I would like to tell you a story. In the midst of all of the negative election posts I noticed that a Liberal friend of mine had posted something on Facebook along the lines of how Trump’s plan for America would never work. Likewise, a Conservative friend of mine commented on his post with some legitimate points as to why he thought my Liberal friend was wrong. This sprawled into a conversation of more than 20 comments as the two went back and forth. Want to know the beauty of it all? They were never once hostile towards one another, ever. Heck, they even thanked each other at the end for a quality conversation. What a truly miraculous thing to see especially after days like today (November 9)!

Think I am wrong about these protests, go right ahead. I have zero problem with that, but I want you to keep this in mind. If one of the farthest left people I know and one of the farthest right people I know can be peaceable in conversation, then what is holding us back? Breath America; you’ll be ok. You were going to be fine if either candidate was elected, just stand together, as one people. Stand united.