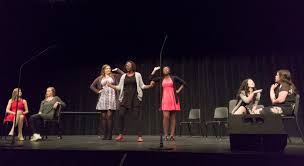 On February 3, the Pella High Speech team traveled to Lin Mar High School in Marion Iowa to compete at Large Group State Speech. The team received 7 straight Division I ratings, 3 overall Division I ratings, and 5 Division II ratings. Out of the 15 entries, 5 groups moved on, making 33 All-Staters. The acts moving onto All-State are the musical theater group Sister Act, the news broadcast POPN News, the musical theater Aladdin, the reader’s theater Wiley and the Hairy Man, and the acting ensemble Y’all. POPN and Sister Act will be performing at All-State. The rest of the acts are non-performing, meaning they won’t be showcased at All-State.

It is an extreme honor to be selected for All-State. In order to move on to All-State, performers have to receive a recommendation from one of the judges. For several of the All-Staters, this year was their last shot at going to Large Group All-State Speech. Senior Brenna Hildebrand, a member of Y’all, is a new All-Stater her senior year.

“Getting to All-State is something everyone in speech wants, and knowing that this was my last year to do that, really put the pressure on. Performing Y’all with my ensemble was a lot of fun, and it’s such an honor to be going to All-State,” said Hildebrand.

It is no doubt that speech members have to put in hard work to receive the honor of attending All-State. Junior Maggie Renaud, a member of Sister Act, commented on how much her group improved from Districts to State.

“We went from struggling with lines and choreography at Districts to being one of the top musical theater groups in the state,” said Renaud.

Speech coaches Suzi Jones and Ashlee Whittington are “so proud, thrilled” of the hard work that the Speech team has put in this season.

“I think this is the record for people that have made it to All-State for large group,” said Jones.  “Everyone was super supportive of each other. It was a really positive day. I’m very excited about All-state.”