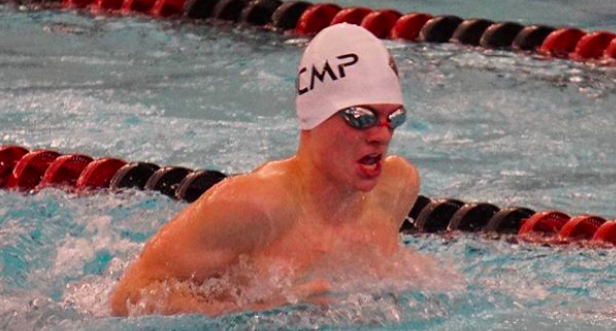 Pella High School has swimming as a winter sport just like basketball, bowling, and wrestling.  Senior Carter Briggs won districts and made it to state. Briggs was excited and proud that he got 1st place on the 100 breaststroke at the districts meet. He won with a time of 1:02.08, which is his best time. He then went on to  swim the 100 yard breaststroke at state for NCMP at the Boys’ Swim State Meet.

“It was a lot of hard work, but since we got to go to Newton, I got to meet a lot of new people, and I have a lot of new friends because of it,” said Briggs.

The Boys’ Swim State meet took place in University of Iowa pool. There are no classes, so every school in Iowa is involved, and they take the top 24 to state. At state, Carter Briggs placed 15th in the 100 breastroke.

“It was kind of sad now, it being my last time in a competitive pool, but I was kind of ready to move on,” said Briggs since this is his last year.

He also did have some great memories on the team.

“We had this thing whenever we would swim against Indianola. They were kind of our rivals and so we would have a tough meet with them. But afterwards we would celebrate with them by doing a belly flop contest off the starting blocks,” said Briggs. “It kind of shows how you can be fierce and race somebody but then afterwards we’re friends again.”

With this being his last year on the swim team, he doesn’t plan on swimming again throughout his college career. He’ll mostly swim during his free time. “I’ll probably do some swimming just to keep in shape,” said Briggs.