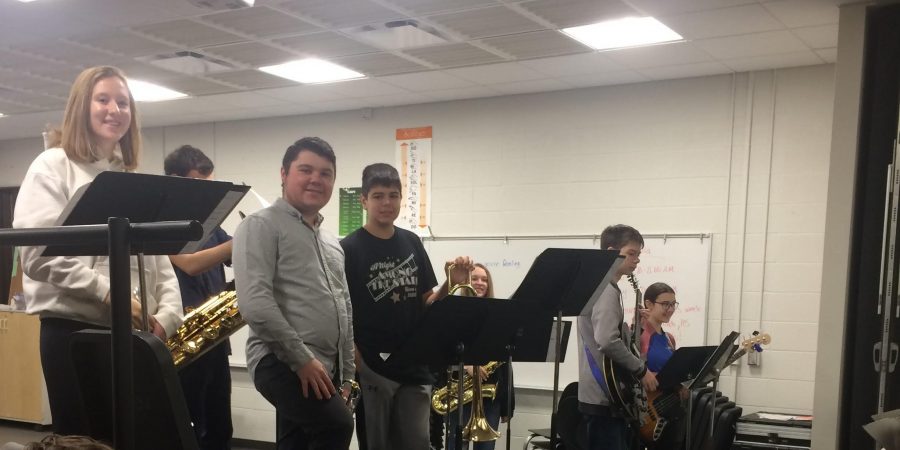 This year’s show choir has had some major changes. A new director, a new choreographer, and a new routine. On top of all of that, there is a new combo director. Mr. Place, one of the three band department directors, has volunteered to lead the 11 student musicians that play behind the show choirs as they perform for both AcaPella’s “Pearl Harbor” and Bravo’s “80’s Rock”.
Freshman Jacob Rietveld is looking forward to this season, “What interested me in combo was all the amazing songs there are and how combo is an important part of AcaPella. It is rewarding by all the relationships there are too by working together with the right notes. I am looking forward to going to all the competitions with the AcaPella show choir.”
So far into the season, they have practiced with the seven AcaPella arrangements. It begins with a march “Anchors Aweigh Medley”, in the middle is the ballad, “Who Are the Brave/Make Them Hear You”, and ends with a sort of rock song called “Save the World Tonight”. Bravo has five songs, beginning with an upbeat and fast-paced song named “Face Off”. Their ballad is called “Caught in the Storm”, which stars one student soloist. The final song “Our Time is Now”, a moderately paced and intense closer. “The most rewarding thing about being in combo is how different the keys of the songs are different and makes the music more challenging,” says Rietveld.
The combo doesn’t join the choir full time until the middle of December, and their season doesn’t kick off until January with their first competition scheduled for the 18th in West Branch.