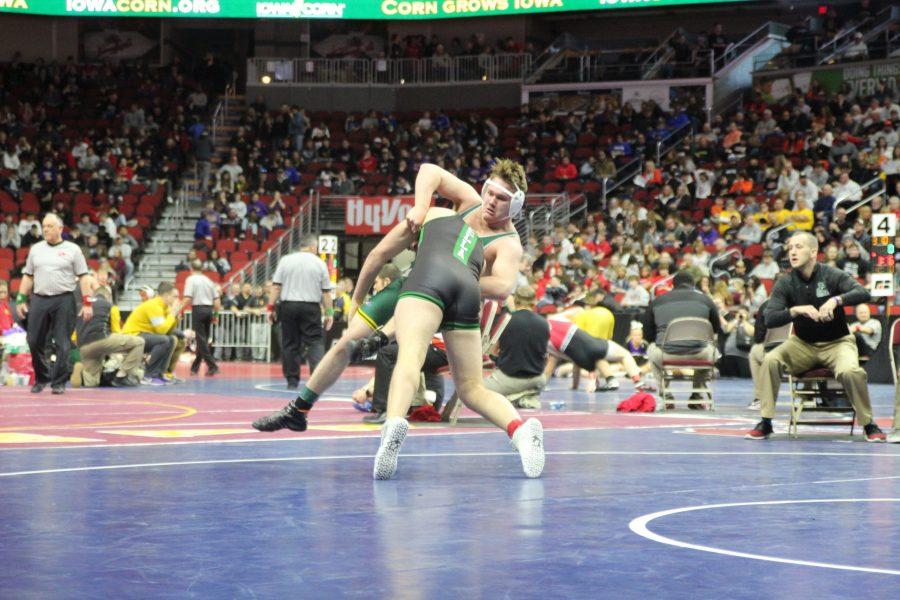 Pella High School has sent at least one wrestler to the state tournament consecutively for many years. This year was no exception when first year wrestler, junior, Kody Huisman, placed second at the district tournament weighing in at 220 pounds. His districts consisted of a hard fought loss to Kaleb Runyon of Southeast Polk, ranked number 3 in the IAwretle.com poll, and a dominating upset against Indianola’s Jaylin Smith, ranked 8th in the IAwrestle.com poll.

“Pinning that Indianola kid was a rush. I lost to him earlier in the season, so getting the last laugh definitely felt good,” said Huisman.

Kody stayed the night in a hotel the night before the first day of the State tournament with Head Coach Jay Pike to mentally prepare for the exhilarating day ahead of him.

“I was pretty nervous heading into the day because I knew my opponents were going to be elite,” said Huisman.

The nerves must have worn off for Huisman before his first match. Huisman was poised off the whistle, but his first opponent had a clear experience advantage on him. Huisman held his own until he was defeated by way of fall in the second period.

“The first match was a good learning experience,” said Huisman. “Pike talked me through how I could improve, and it was on to the next match.”

Move on is exactly what he did, making short work of his opponent, winning by pinfall in the first minute of his match.

“I felt really good after the second match. Coach didn’t let me live in the moment though,” said Huisman. “He told me it was time to move onto my next match.”

Huisman’s experience on the second day of the State tournament was short-lived. He lost his first match early on against a tough opponent. Huisman is looking to come back next year, this time at heavyweight.

“I’m moving on to track now, then football, but when wrestling season comes back, I’m looking for another shot at the state title.”