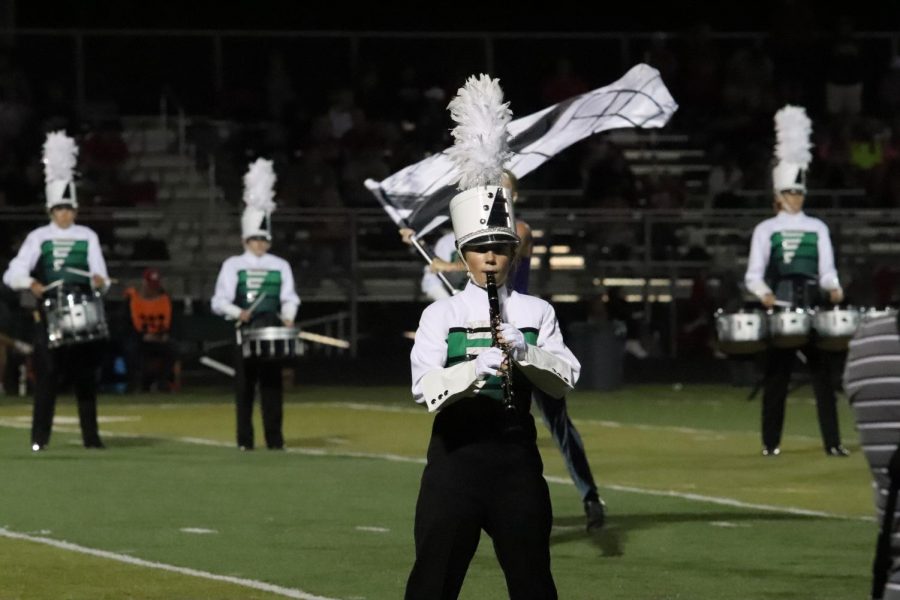 Practicing since July, the Pella Marching Dutch were one of the first groups to start meeting at Pella High School since cancellations last spring.  The 2020 marching band season is underway . . . now with some minor changes because of COVID-19.

One change is that band members must maintain six feet of distance from each other while marching, and this distance has probably affected the drum line the most, according to senior Isaac Piersma, who plays percussion.  A change affecting the other instruments is the requirement for bell covers, which are cloth covers (like masks) to put over the parts of the instruments the air comes out. Also, the members bring their own water, and their drink breaks allow for there to be movement after 15 minutes. Once they transfer inside for concert band, the band directors have ordered special masks with holes for the instruments that only open as much as the players need.

“Students are handling the changes well,” said band director Gabe Schott, and it seems to him that students are enjoying making music together after the break.

This year’s theme–Stained Glass: A Light in Times of Darkness–is about staying positive.

“It’s a little different take on the ‘stained glass’ theme we did a few years ago and it’s more positive than some other schools’ themes,” says Piersma.

Directors Dameon Place, Jeff Robilliard, Gabe Schott, and Rachael Wurr added “A Light in Times of Darkness” to the theme after the past few challenging months to represent overcoming adversity–such as COVID–according to Schott.

“Being able to return to school, classes, and especially band, has allowed light in, just like light breaking through a stained glass window,” said senior drum major Annika Boonstra.

The stained glass theme is represented through the variety of colors–both musically and visually–through five movements: Psalm, Agitato, Clair de Lune, a Percussion Feature, and Doxology.  Music from the doxology is found throughout each movement, since it is typically heard in churches, many of which have stained glass.  In the first movement, the flags have black and white outlines; after this intro, the flags in the second movement are reds and yellows; the flags in the third movement are blues and purples to represent the moon shining through glass in the night.  The fourth movement is a percussion feature which includes a lot of techno, and the final movement ends with a 40-foot-long flag flying over the band.

Boonstra is looking forward to performing at football games and contests to bring some light into the world after a season of darkness.  She believes that COVID-19 is still an issue, but with some slight changes, students can still enjoy a normal season of band.

“Band may look a little different,” says Boonstra, “but it is the same culture and tradition that leaders have kept alive for many years. Kids are coming everyday with positive mindsets and hard working attitudes allowing us to make progress efficiently.”