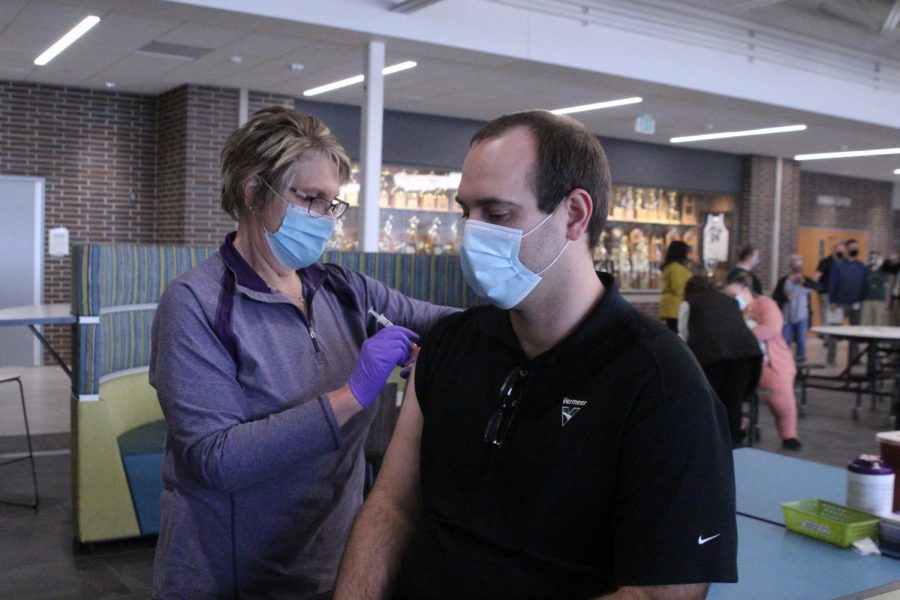 Exactly one year ago–February 25, 2020–the CDC declared that COVID-19 was heading toward pandemic status. Roughly 10 months later, the FDA endorsed the Moderna and Pfizer vaccines.  Medical workers began receiving the vaccines in December, and most recently, the shot became available to teachers.  The vaccine comes in two doses (a few weeks apart), and staff members from the Pella School District had the opportunity to get their first dose February 10. About 117 staff members (out of around 130) from Pella High received the vaccine.

Many were excited to receive it, but the vaccine had one downside.

“My arm was really sore last night,” said English teacher Amy Blanton.  Vaccinated teachers seemed to agree that this vaccine was similar to a tetanus shot: it didn’t hurt much going in, but the next day was a different story.  But, like every other shot, the pain goes away, and people are left with a benefit.

“I am grateful that I had the opportunity to get it because my mom and my mother-in-law are both super at risk,” said English teacher Laura Fank, “and it means that I’m one step closer to being able to visit with them, which I look forward to.”

Fank said that she was not concerned as a whole about negative effects of the vaccine because her husband was fine after receiving it.

Also, “I think as people have been getting the vaccine we will probably have more data about this particular one than we have about any others,” she said.

From Fank’s perspective, if there is a risk in taking the vaccine, it’s worth it; however, not all teachers feel the same way.

“I don’t like having things put in my body that have not been well-tested,” said social studies teacher Karen Ryals.

She said that she tends to have a large negative reaction to shots, so she didn’t want to risk it with the new vaccine.

“If I’m going to get sick, I might as well get the virus instead of getting sick because I took a shot,” she said.

Ryals also admitted that she is not afraid of the virus. Through 30 years of teaching, kids have breathed germs on her so she’s gotten sick from them, and students have gotten sick from her.

“It’s kind of a natural part of life,” she said.

But despite differing opinions on the vaccine, teachers agree that their vaccination will not likely cause changes for mask requirements.  The teachers are only partially vaccinated (their second dose comes March 10), and it will take a few weeks before that kicks in.

“I think it’ll be quite a while until the majority of our population has either had [the virus] or had the vaccine,” said Fank, “and while I understand that kids are tired of wearing masks, I think that it would be worse to know that somebody had accidentally shared it with somebody else.”

So until students can receive vaccines, mask wearing remains the norm.