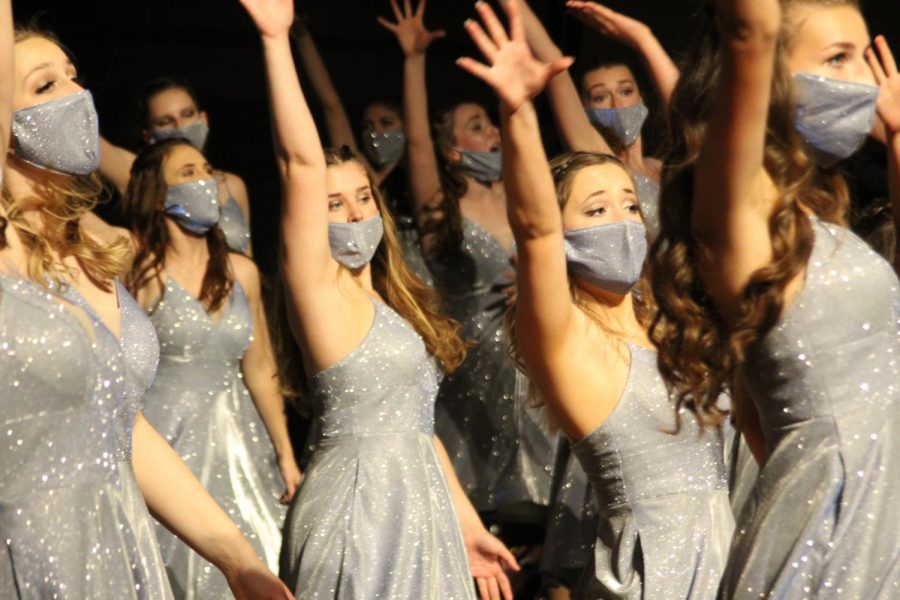 Many people have been to a traditional orchestra, band, or choir concert.  But on April 30 and May 1, people had the opportunity to attend Carnaby Club.

“Carnaby Club is a showcase event where various ensembles from the music department perform for an audience to share their talents and hard work,” junior Luci Laidlaw said.

Laidlaw performed in the orchestra ensemble and a string quartet.

She said, “I really liked participating in Carnaby Club because it gave me a chance to collaborate with some students in orchestra that I didn’t previously know very well or hadn’t worked with in the past.”

Laidlaw enjoyed working with the others in the group as a team, and she said that the small group setting helped everyone develop their leadership skills.

Freshman Ashton Huizer is a member of the Bravo show choir. She said that her favorite piece to perform was “Work Hard, Play Harder” because of the message.

“I think the message that comes out of it is that if you work hard you can achieve anything you want to. But when you achieve those things you can play hard and have fun!”

AcaPella show choir also showcased their performance, and several choir members sang solos, duets, or trios. Senior Travis Mitchell performed a solo one night and a duet the second night with senior Hannah Tschetter, which he said was his favorite piece to perform.

“It was so fun to perform with one of my best friends, and a wonderful performer at that,” he said.

Mitchell said that he adores the rush of performance: “When I’m performing, the nervous energy translates to energy in the performance.”

Senior Isaac Piersma played percussion in several acts, and his favorites were the stool pigeon percussion ensemble, the Jazz 1 rhythm section medley, and the Jazz 1 songs. He said he likes the relaxed atmosphere of Carnaby Club; however, the preparation presented challenges.

“The biggest challenge is just finding time to rehearse for everything, especially when you’re in a lot of acts,” he said.

Mitchell and Laidlaw noted the same thing. Laidlaw specifically noted that her group had to wait to start preparing for Carnaby until several orchestra events were over; however, this might have been a positive thing.

“I think being short on time actually helped us stay more focused and forced us to work really hard and make progress at each rehearsal,” she said.

Huizer said that for her, “the biggest challenge was getting back into the swing of show choir after not doing our showcase for over a month.”

But despite struggles with timing, both performances went smoothly, and the performers seemed to have a lot of fun; in fact, some had ideas to make Carnaby Club better.

“I would have liked to have had a big stage for show choir because then it would give the audience a better view of the show,” said Mitchell.

Laidlaw said that she wishes the band, orchestra, and choir departments collaborated for a few songs instead of just playing in their own ensembles.

“I think the audience would really gain an appreciation for each section of the music department at our school if we all performed one massive song together,” she said.

These musicians will continue to make music for the rest of the year–in Tulip Time, in marching band, and in other concerts.

“One of the best things about Carnaby Club, or as I always say about playing music in general, is simply bringing joy to the audience,” said Laidlaw. “It makes me so happy to see them happy after watching us musicians do what we love.”