Clue: On Stage: The Review 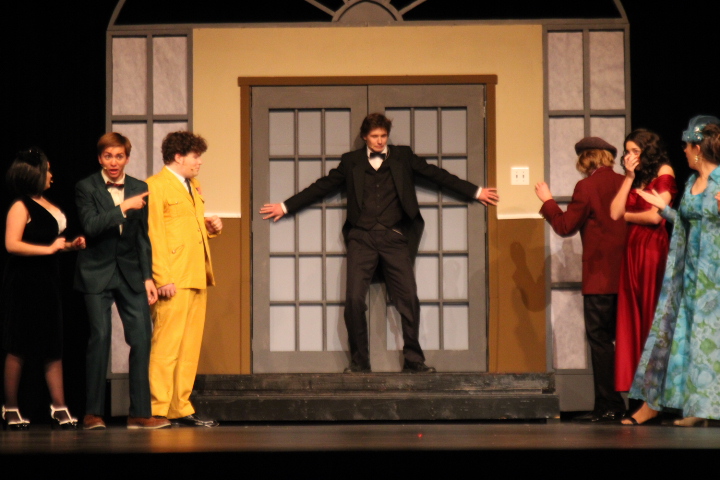 The Butler (Connor Folkers) slams the door as the Motorist tries to enter the mansion.

Should you go see Clue: On Stage? The answer is yes. Absolutely yes. The play is based on the 1949 board game Clue with classic characters like Professor Plum and Miss Scarlett.

This year’s fall play stars Conner Folkers as the Butler, and he does a phenomenal job embodying his role. He does a great job in delivering his lines and making his character seem more relatable, which seems like an almost nearly impossible job, seeing as a lot of these characters aren’t too relatable.

Every time Folkers has a monologue, he performs with great expression, making it very entertaining and captivating that you forget how long he has been speaking.

As a cast, the Clue actors have amazing chemistry, and they all work together very well. If or when they made a mistake, they continued on seamlessly, staying in character the whole time.

All of the jokes were very funny, and the audience continuously burst into laughter. The small little details really matter in Clue, and if you pay attention and remember the details, this will make the play much more enjoyable.

The transition times could have been quicker. While moving sets can be very hard and getting props on the stage a tedious task, the audience quickly lost interest, and it was sometimes hard for them to start paying attention again.

Understanding some of the strong accents was also a challenge. There was a chorus of “what did they say?” throughout the auditorium at times. If they were to slow down a little bit or use more diction, this would have made it easier to understand some of the characters.

This show is perfect for all ages because the younger kids will enjoy the aspect of it being a murder mystery and “whodunnit,” while the adults can laugh at all of the jokes that fly over the kids’ heads.