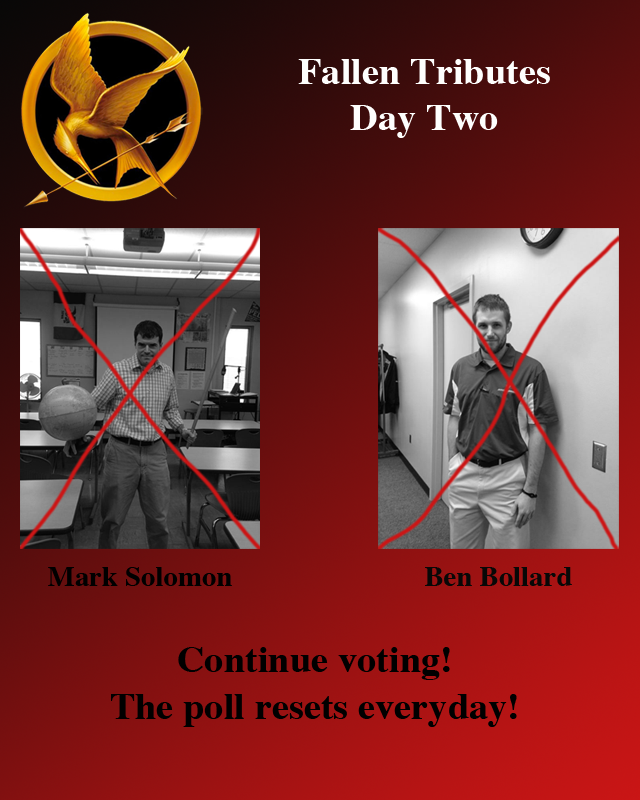 Day two of the teacher games has concluded and the tributes have fought hard to survive these last two days. However, there were two more deaths last night.  The first came right before dusk. Mr. Solomon happened to make his way back to the cornucopia, not yet knowing that it was already taken. As he walked into base camp, the ground beneath his foot gave, and he fell into a deep pit. Mr. Van Vark, who set up the trap, came over and finished off a tangled Mr. Solomon.

Later that night, Mrs. Chaplin walked through the woods. She walked and walked until she too stepped into a trap. Except this one was made out of a blanket. Being snatched up by the spanish teacher Mrs. Weis. However, when Mrs. Weis saw who she had captured she didn’t kill her. Instead, she aligned with Mrs. Chaplin, forming a powerful duet.

The second death came early this morning, when Mr. Bollard was running by a stream. He looked back to see if his pursuer was still on his back, he was. Mr. Cutler, who was out in the woods to collect supplies, saw Bollard and decided to go for the kill. Bollard took off running at the sight of the bearded cross country coach. However fast Bollard was, Cutler was faster. Instead of catching him though, Cutler simply ran Bollard to death.

That night, Cutler returned to his camp to tell his group. After hearing of the success of Van Vark and Cutler, the group high fived, and Charma gave out celebratory mints.

Van Vark was in first with 36 votes

In second was Jensen

And in third was Charma