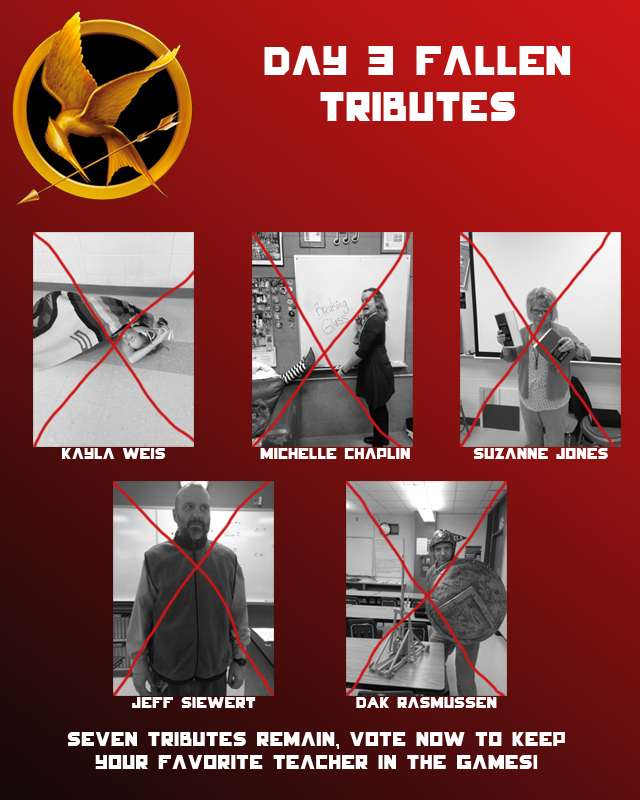 Day three in the games was unlike the others. Instead of timid gameplay and tributes hiding to survive, day three had become a bloodbath. Five total deaths were racked up in the arena yesterday. The first death came when the English Teachers were walking down the bank of the river for water. As they bent down to fill their canteens, Mrs. Williams saw something in the corner of her eye. It was Mr. Siewert, dressed in his nice sweater vest, standing on a tree just chilling. Mrs. Williams, not telling her group where she was going, got up and walked over to him. Mr. Siewert, being the type of guy who just likes to have a nice chat, watched her approach him. When she got to him she simply said, “Wait, you are still in?!” He replied with a chuckle, “Of course I am”. Then with lightning speed, Siewert picked up a sharpened ruler and threw it at the bank, striking Mrs. Jones. He bolted for the woods, but Mrs. Williams soon caught up to him and captured him. It wouldn’t take long for her to read him to death with the words of shakespeare. As the cannon sounded for Mr. Siewert, Mrs. Jones laid there dying. Miss Jensen silently, with the approval of her friend and ally Mrs. Jones, put her out of her misery.

Later that day along the coast of the arena, our powerful duet Mrs. Weis and Mrs. Chaplin, strolled along the beach. Little did they know that Thorson, decked out in homemade camo, was following them. He waited for the opportune moment when the two would stand on the edge of the cliff and look into the sea to strike. When that moment did come, he sprung from the brush and grabbed Mrs. Chaplin. He lifted her above his head and quickly tossed her over the cliff. Mrs. Weis, trying not to get killed as well, sliced Thorson with her scissors causing him to flee into the woods.

Mrs. Weis quickly ran down the hill to find her fallen ally. When she found her, she got down on her knees and began to sing. The song was beautiful and the whole arena could hear it. However, Thorson was waiting in the trees. As Mrs. Weis belted out her last note, Thorson’s arrow found its target. Moments later the cannon sounded.

Later that night, the triumvirate sat around the fire and Charma handed out mints. She knew that her time was becoming limited as more tributes died. So, she decided to give herself a chance. After eating the mint, Rasmussen stood up and walked off into the trees. The rest of the group wondered where he was going, but assumed he’d be back soon. He wouldn’t come back though, he fell over dead, his mint had been poisoned.  The cannon sounded minutes later. The group looked at each other, hoping Rasmussen would return any second.