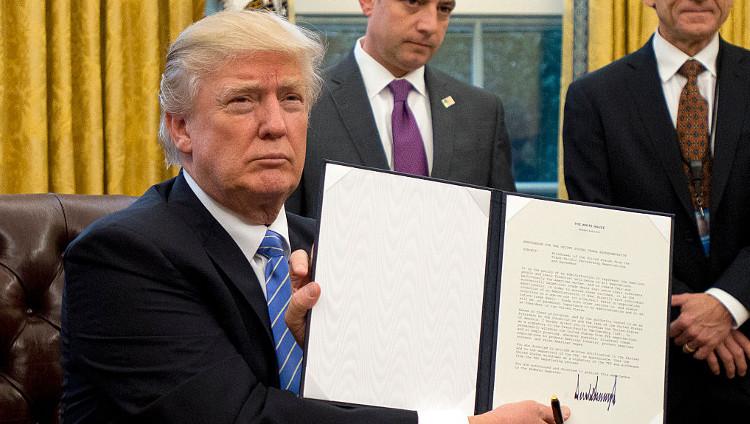 Right off the bat I am going to be quite frank with all of you; I don’t like President Donald Trump. Now please hear me out here. I am not going to tell you that he’s “Not My President” or anything of that nature. I respect his position as the President of the United States. However, I do want it to be clear that I am not a fan of his or of his recent actions, and please allow me to tell you why.

In January of last year, I attended the Trump rally that was held at Central College. I was able to see my fellow community members rally around a man that, at the time, I saw as a complete and utter joke. I remember telling myself that I had nothing to worry about because I genuinely did not think that Trump would make it to the Oval Office. And yet here we are, almost a year later, and President Trump has managed to do just what I thought was impossible.  During his first month in office, the President has pushed through several executive orders, most of which have been controversial to say the least. For the sake of time, I would like to focus specifically on Trump’s travel ban regarding immigrants from Iran, Iraq, Syria, Sudan, Libya, Yemen and Somalia.

It is fair to say that perhaps the most notable of President Trump’s recent executive orders is his ban on immigration to “keep out radical Islamic terrorists.” This ban stops immigration from seven predominantly Muslim countries for 90 days. The order also stops all refugees from entering the US for 120 days. Syrian refugees have been indefinitely suspended from coming into our country. I would like to encourage everyone to read the actual executive order which can be found online on the National Public Radio’s website.

President Trump’s main argument was that he only wants to let in immigrants who will “deeply love our people” and America. Of course, overall this idea makes sense. After all, we don’t want to be inviting terrorists to our doorstep. The only problem is that there is no evidence that refugees or people coming from these countries are terrorists. According to CNN and the Huffington Post, these seven countries have contributed to zero deaths on American soil.

“The various people who have, in fact, committed terrorist acts in this country, from 9/11 on, none of them came from any of the seven countries that are the subject of the president’s executive order,” said Representative Jerrold Nadler in a CNN interview.

Another one of my major problems with this order is way that it treats Muslim refugees. Not only is this order turning a cold shoulder to people in need, but it is also crafted towards prioritizing the lives of Christian immigrants. The order says that the U.S. Refugees Admittance Program are to “prioritize refugee claims made by individuals on the basis of religious-based persecution, provided that the religion of the individual is a minority religion in the individual’s country of nationality.” The problem with this is the fact that each of the seven countries are predominantly Muslim, meaning that by definition Christian refugees are given priority. Therefore, any Muslim refugees fleeing for religious persecution, due to sectarian prejudices, are out of luck.

I also want to address claims that Obama’s 2011 “ban” on visas for Iraqi Refugees for 6 months is similar to President Trump’s ban. Conservatives have criticized Trump protesters for turning a blind eye to Obama’s order. However, Obama was also met with criticism for his actions. Not only that but Obama’s “ban” was actually a slowdown of visas only for the country of Iraq. It reestablished stricter vetting protocols that are still in act today. In addition to this, the Iraqi ban had more a more valid reason as it occurred in the heat of the conflict and was a response to an actual threat. Right before this act took place, two Iraqi Al-Qaeda members had been found in Kentucky.

I think that President Trump may have forgotten the ideals for which America stands. Are we not the land of the free and home of the brave? Tell me when did the so called “brave” cower in fear from refugees? When did Lady Liberty stop being a beacon of light and hope for those who need her? We are teaching our youth that we don’t need to help out the needy. By example, we teaching them that it is okay to be conscious of a group of people’s suffering and ignore it. Not only ignore it but to turn towards that group with hatred instead of love.