By Brenna Hildebrand November 15, 2016 No Comments 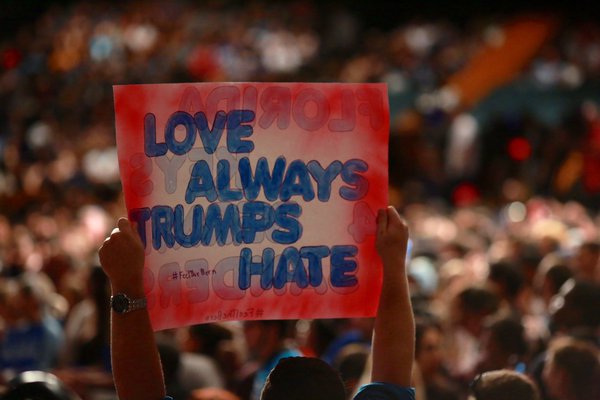 “Trump is not my president.” “Love Trumps Hate.” “I’m still with her.” These are a few of many signs held by vigilant protesters in wake of a new president-elect. In cities such as Los Angeles, New York, Orlando, and many more, millennials and others, younger and older, banded together in a mutual disagreement against the election result.

Some may say that we have no power to change anything now. That is completely and utterly wrong. Democracy is founded on the belief that people can speak their minds and change their surroundings with action and persistence. America is ruled under a democracy. Nothing can stop you or me from doing something about the negativity our country has been drenched in.

Sure, Trump might be able to do good things, but he can also do a world of harm. He openly stands against many minorities and wants to create laws that inhibit the freedoms and rights of those groups, and Pence is no better. He has openly spoken out against the LGBTQ+ community and openly shared his agreement to overturn any laws that are “unChristian.” Pence was in agreement with two laws that would put LGBTQ+ children at risk. He signed the First Amendment Defense Act that would make it legal to discriminate against the LGBTQ+ community as long as the excuse was religiously affiliated. He also was in agreement with a law that would divert HIV prevention funding into funding for conversion therapy to “turn the LGBTQ+ community straight.” We have made so many strides in the rights of these people with Obama in office, only for them to be stripped away again. That is so dangerous to so many youth today. So many children may grow into adulthood without the right to marry whomever they love. So many young lives changed just because they didn’t have a say in this election.

The election of Trump has spurred much violence against minority groups. Property of women, LGBTQ+ community members, Jews, Muslims, African Americans, and others has been destructed and defaced. Esra Nur Altun, a San Jose State student, reported an incident wherein her Hijab was ripped off by a group of boys while being verbally assaulted. So many hateful words have been spray painted across walls, cars, windows, busses, and monuments. Not only property has been destroyed, though. Violent acts have been committed against these people. Property can be replaced. Physical damage does much more than physically damage. Things like that ruin people for a lifetime.

I will first say this. I do not condone the destruction of property and vandalism that occurred during the protests against Trump. Wrecking the world we live in is very undemocratic and quite frankly, hypocritical because we claim to be peacefully protesting. It invalidates our point and paints a picture of negativity over the otherwise positive and powerful event.

I do condone rallying and protesting against what people believe is wrong. We have a right to peacefully protest; to sit idly by and not exercise that right is shameful and sad. We do not have to sit down and let Trump’s hateful rhetoric spread without any sort of intervention.

Yes, ultimately, Trump won the election. He won the electoral college votes. Clinton, though, won the popular vote. WE did not choose Trump. We have the right to fight back against his beliefs with our own. It enrages me when people just tell me to sit there and let it happen. It doesn’t have to be that way. Change will come as long as we demand it.

We the people were given the rights to our voices and power to influence. Why waste that?