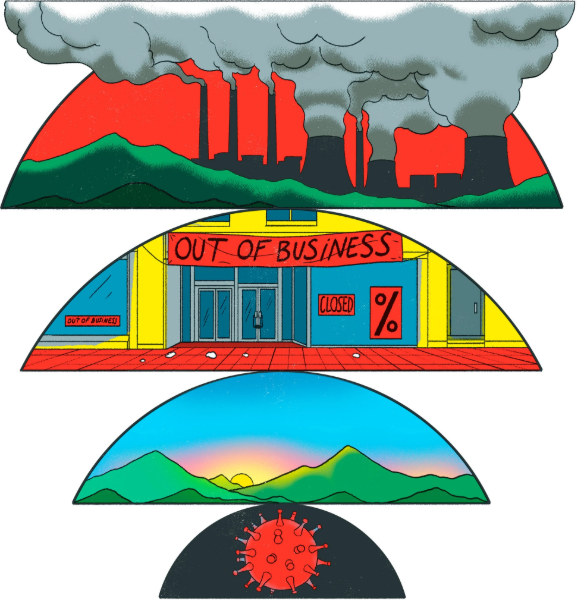 Schools are closing, workers are asked to stay home, and concerts and sporting events are put on hold to help slow the spread of the coronavirus (COVID-19). But what you may not know about all of these changes is, social distancing may cause an unexpected change in climate change. As the nation adjusts many of the actions people are taking in response to the coronavirus outbreak could benefit the environment by reducing carbon footprint.

The biggest sources of carbon emissions caused by our lifestyles come from three activities, according to Dr. Kimberly Nicholas, a researcher at the Lund University Center for Sustainability Studies in Sweden.

“Any time you can avoid getting on a plane, getting in a car or eating animal products, that’s a substantial climate savings,” said Nicholas.

“For average Americans, the biggest source of greenhouse gas emissions is driving,” said Nicholas.  Anything that reduces driving “has a big impact on our climate pollution.”

Flight restrictions and less flying can have a large effect as well: one round-trip flight from New York to London, she said, produces as much greenhouse gas emissions as the preventive climate impact of nearly eight years of recycling. Nicholas was an author of a 2018 study that examines greenhouse gas emissions reductions in actions people take to fight climate change, and is currently writing a book about personal action and the climate crisis.

Food may also have an effect. “Eating beef has a disproportionate climate impact,” according to Nicholas, while eating foods “lower on the food chain,” such as plants, results in a much smaller carbon footprint. So you can help save the world by eating all of the beans and rice you stocked up on when you first heard about the outbreak.

What we do/use at home may also have an effect. For example, if we have to stay home, we will want to stay cozy and comfortable as many people may turn up their thermostats to keep warm. How many people are turning up the heat greatly depends on where they live. People who live in naturally warmer places won’t use as much heat, so a person’s carbon footprint really depends on where they live.

Christopher M. Jones, lead developer at the CoolClimate Network, said, “If you live in a cold climate, heating your home can more than offset the savings from driving your vehicle.”

Online shopping could have an effect as well. Whether you’re bored, need something or just avoiding the stores, you may shop online a lot more. A bump in online shopping might be bad for your wallet, but it could be good for the planet according to Nicholas.  She cited research suggesting that people who decide to use online ordering and package delivery could well be reducing their effect on climate change, thanks to the benefits of logistically organized, centralized delivery routes and driving less.

“I would expect in general that having fewer vehicles on the road is better for the climate,” she said.

Everyone has adapted to new ways for now, but will these low-carbon behaviors continue after this crisis is over? Many people will probably go back to what they were doing before the outbreak and all of the reduced carbon will go back to how it was before.  Charles Duhigg, the author of “The Power of Habit” and a former New York Times reporter, said habits built over lifetimes are hard to shake.

“As soon as the environment becomes stable again, the habit starts to reassert itself.”

However, according to Duhigg, some cultural habits could, if the pandemic response lasts long enough, take hold.

We have no way of knowing how people will act once this is all over, but for now, the adjustments we are all making are creating a change in climate for the better.

By Tatum Tierney May 6, 2020
Uncategorized