Tattoos: a vast topic. Are they acceptable? Where should they be on the body? What should they be of? These are all questions up for debate. These questions have influenced many people in multiple ways. In the state of Iowa, it is illegal for a minor under the age of 18 to get a tattoo from a licensed for-profit tattoo shop. However, in other states, as long as the minor has parental consent, they can get as much ink as they can pay for. This means that minors from Iowa can leave the state and get a tattoo, and it is completely legal. But what can tattoos say about people? What do people think?

Tattoos, especially on young people, are considered unprofessional. Many jobs prohibit them, for fear that they may scare away customers or business partners. However, for jobs that do not require customer service, such as a truck driver, chef, or a teacher, tattoos are often allowed. However, some hospitals, police departments, dental clinics, and law firms prohibit them, and they are not allowed on visible places like arms, legs, hands, head, and neck . This is due to negative associations with tattoos, as tattoos may display inappropriate behaviour, images, or can be linked to criminal activity. This may be disturbing/distracting to some, and it would be easier to not have tattoos in the workforce, as it takes away from business.

In addition, tattoos are considered “unprofessional”, and can affect a company’s image. Because of this, the same places which prohibit tattoos also prohibit piercings, brandings, unnatural hair colors, and long hair (for men) are also prohibited.

Even the military is restrictive of tattoos. Ink on the head, neck, hands, and wrists are often prohibited, unless for religious reasons. They do this to maintain uniform standards, and to ease tensions and conflicts between service members. They’re not totally banned, but there are standards which need to be followed.

I honestly want to get some serious ink. Nothing really special, just a knot design, or a maybe just a tribal design on my chest and arms. I think they can really bring out a person’s interests and personality. I personally think tattoos are amazingly beautiful.
Some students at PHS have ink in them. Some have it for different reasons, some got them for fun, and others got them for sentimental and emotional reasons. Some of these students are vocal about their reasons. 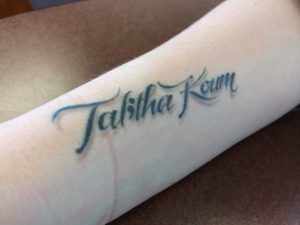 “(I got it) Because it is something meaningful to me,” said Emily Kriegel, a junior at PHS. “I just never wanted to forget it.”

Junior Mercedes Vandevoort has a tattoo on her forearm.

“It’s my dads’ birthday in roman numerals,” said Senior DeAngelo Wise. “He died in 2013, and I wanted to commemorate him in a special way.”

So if you want some ink, go right on ahead. But before you do, just consider what the ink may do to you. You may not be able to find the job you want; and your dreams may not be possible. I think tattoos are not a bad thing, but you must consider what other people think of them, before you permanently make that decision.