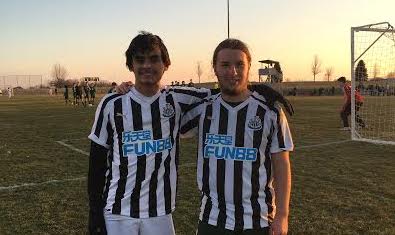 There are so many different sports prevalent in our world today. Some are only found in certain countries, but others are found all across the world. But out of all of the world’s sports, soccer is the most popular worldwide and can be found in nearly every country. This international pervasiveness has connected two Pella teenagers with very different heritage.
This winter, boys at Pella and Pella Christian who were planning to play on the soccer teams in the fall had the opportunity to play pick-up futsal on Monday nights at the Pella Rec Center. Instead of playing against each other, the two schools combined to form one team. Although they may be rivals in the spring season, the two teams were able to gain friendship and respect by training and playing together.
One of the friendships that arose from this experience was between Geordie Laidlaw, a sophomore at Pella High School, and Daniel Mora, a junior at Pella Christian who is a foreign exchange student from Paraguay.
“I don’t quite remember when or how I met Geordie, but I am sure it was playing soccer,” said Mora. “It was very easy to be friends with him because he is a nice person, and especially because we both love the sport a lot.”
Mora’s older sister went to Dordt College in Sioux Center, Iowa. His mom then got a job at Pella Christian Grade School, which is why he decided to be a foreign exchange student there. Laidlaw has lived in Pella for his entire life, but his father is from Gateshead, England, just south of a town called Newcastle. Through their friendship, the two students learned that they shared a common interest.
“One of my favorite players and fellow compatriot, Miguel Almiron, recently transferred to Newcastle from Atlanta United, so now I am a Newcastle fan. So when Geordie told me he was going to England and offered to buy me a jersey I couldn’t say no.”
Newcastle United is a Premier League team from the home town of Laidlaw’s ancestry. Because of this player’s transfer, Mora now also has a burning passion for the team, along with Laidlaw. This gave Laidlaw an idea.
“Once I had found out that Almiron was transferring to Newcastle, I couldn’t pass up the opportunity to welcome a new Newcastle fan into the club,” said Laidlaw. “I offered to buy Daniel an Almiron jersey while I was visiting Newcastle this spring break. I also bought myself a Sean Longstaff jersey, who is a Newcastle player who grew up in the Newcastle area.”
The jerseys of these two students are great representations of their backgrounds. Laidlaw’s jersey is of a player who grew up in the town of Newcastle where the club is based in, just like Laidlaw’s father. Mora’s jersey is of a player who transferred to the club and began to temporarily live in the country, just like Mora has done from Paraguay to Pella. After the Pella vs. Pella Christian soccer game, Laidlaw and Mora met after the game to take a picture with their jerseys on. Despite being on separate teams for the game, they are still united with their common interest in the Newcastle United soccer team.
“Daniel is a great teammate and he makes the game more exciting,” said Laidlaw. “Soccer is such a powerful sport that two people from completely different backgrounds and rival schools can be connected through it. Soccer really can connect the world.”