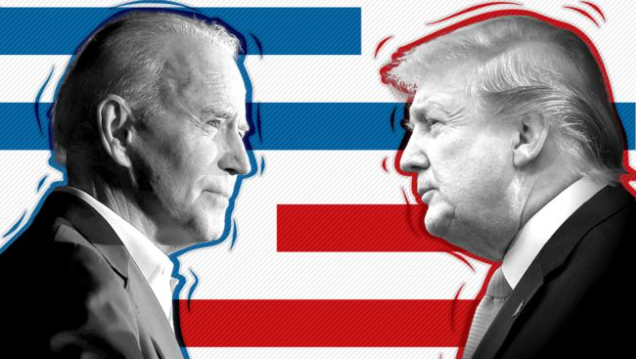 Memorable quotes from the Republican and Democratic National Conventions

“Many of the ideas we fought for [in my campaign] which just a few years ago were considered ‘radical,’ are now mainstream.  If Donald Trump is re-elected, all the progress we have made will be in jeopardy. … Together we must build a nation that is more equitable, more compassionate, and more inclusive.”

“Joe Biden’s] faith is unshakeable because it’s not in politicians or in political parties–it’s not even in himself; it’s in the providence of God. His faith is in you–in us. … I know that if we entrust this nation to Joe, he will do for your family what he did for ours.”

“[The Trump] administration has shown it will tear our democracy down if that’s what it takes for them to win. … They know they can’t win you over with their policies, so they’re hoping they can make it has hard as possible for you to vote and to convince you that your vote does not matter. … Do not let them take away your power. Do not let them take away your democracy.  We are going to bring those words in our founding document to life.”

“Donald Trump’s ignorance and incompetence have always been a danger to our country.  COVID-19 was Trump’s biggest test. He failed miserably. … When our children and our grandchildren ask what we did during this dark chapter in our nation’s history, we will be able to look them squarely in the eye and say, we organized, we persisted, and we changed America.”

“I’ve seen first-hand Donald Trump’s disrespect for facts, for working families, and for women in particular. Disrespect written into his policies toward our health and our rights–not just his conduct.”

“You know, all elections are important. But we know in our bones this one is more consequential. America is at an inflection point. A time of real peril, but of extraordinary possibilities. We can choose the path of becoming angrier, less hopeful, and more divided. A path of shadow and suspicion. Or we can choose a different path, and together, take this chance to heal, to be reborn, to unite. A path of hope and light. This is a life-changing election that will determine America’s future for a very long time. … What we know about this president is if he’s given four more years he will be what he’s been the last four years. A president who takes no responsibility, refuses to lead, blames others, cozies up to dictators, and fans the flames of hate and division.”

“Make no mistake: Joe Biden and Kamala Harris want a cultural revolution. A fundamentally different America. If we let them…they will turn our country into a socialist utopia…and history has taught us that path only leads to pain and misery, especially for hard-working people hoping to rise.”

“Growing up as a young child in Slovenia, which was under communist rule at the time, I always heard about an amazing place called America — a land that stood for freedom and opportunity. As I grew older it became my goal to move to the United States and follow my dream of working in the fashion industry. …I understand what a privilege it is to live here and to enjoy the freedoms and opportunities that we have.”

“In the Middle East, when Iran threatened, the President approved a strike that killed the Iranian terrorist Kassam Suleimani. …Today because of the President’s determination and leadership, the ISIS caliphate is wiped out. … In North Korea, the President lowered the temperature, and against all odds got the North Korean leadership to the table. ”

“The economy soared to new heights….  Wages went through the roof.  Unemployment reached historic lows especially for Black Americans, Hispanic Americans, women. Trade deals were ripped up and renegotiated. … Joe Biden is a politician who has been in Washington for 47 years. … He does not know the slightest thing about the American worker or the American business.”

“They want to defund the police and take away your Second Amendment rights.  They want free health care for illegal immigrants, yet they offer no protection at all for unborn Americans.”

“[President Trump] sees America for what it is: a nation that has done more good in this world than any other.  A nation that deserves far more gratitude than grievance. … President Trump and I will always support the right of Americans to peaceful protest. But rioting and looting is not peaceful protest. Tearing down statues is not free speech. … And under President Trump, we will always stand with those who stand on the thin blue line, and we’re not going to defund the police not now, not ever.”

“At the Democrat National Convention, Joe Biden and his party repeatedly assailed America as a land of racial, economic, and social injustice. So tonight, I ask you a very simple question: How can the Democrat Party ask to lead our country when it spends so much time tearing down our country?  In the left’s backward view, they do not see America as the most free, just, and exceptional nation on earth. Instead, they see a wicked nation that must be punished for its sins. Our opponents say that redemption for YOU can only come from giving power to THEM. This is a tired anthem spoken by every repressive movement throughout history. But in this country, we don’t look to career politicians for salvation. In America, we don’t turn to government to restore our souls – we put our faith in Almighty God.”