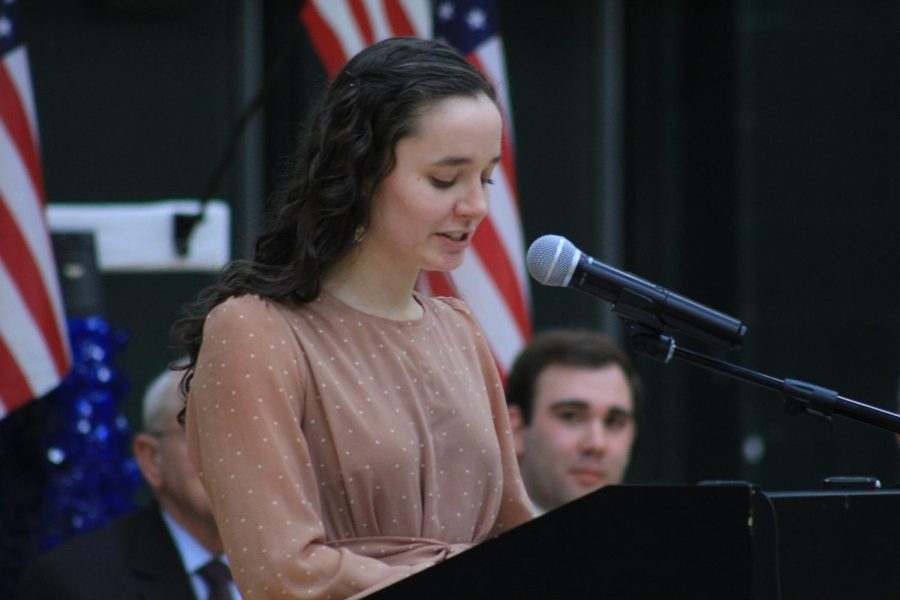 Passion at PHS Solves a Problem

On Wednesday, February 16, PHS had a flag assembly recognizing an important donation. The American Legion Post 89  generously donated flags for the entire school district. The entire process to get flags for the district was started by junior Maddie Schmitz.

Schmitz describes why she feels so passionate about the importance of having a flag in each classroom. “Countless men and women have given their time or lives and saying the Pledge of Allegiance to the flag is a way to respect them. It represents all of the people in our country that make it work and how we have overcome adversity in the past and will continue to do so.”

However, with our school’s limited budget, when the Pledge of Allegiance became a part of our daily routine, the struggle to find flags became an issue. Getting real flags, in such a short amount of time, was almost impossible for the district to get for the first day of school. So, the administration found a quick solution to the problem: printing pictures with flags on paper and laminating them. Teachers hung them in their classrooms in preparation for the beginning of the school year. When students arrived on the first day, we turned to the laminated papers and recited our country’s pledge.

Saying the Pledge of Allegiance this way sparked Schmitz to take action. “I brought up the silliness of reciting the Pledge to a piece of paper to the student council and then began working with Mr. Beckel to figure out how we could get flags into classrooms.”

After Schmitz reached out to the American Legion, they met as a group to determine what contribution they could make. Originally Schmitz asked for funding for approximately 60 flags, enough for every classroom in the high school. What the American Legion agreed to do took Schmitz by surprise.

Schmitz described her gratitude during her speech. “They went over and beyond, offering to purchase 175 American flags for the entire Pella Community school district. We cannot thank them enough for their generosity, not only for the flags, but for their service to our country.”

The idea of unity to each other and to our country is important to me. Not only because of family serving in the military, but because we live in a great country with great opportunities. Regardless of social class, race, religion, or other beliefs, as Americans, we should all have one important thing in common: being united under the ideals of life, liberty, and the pursuit of happiness. The American flag is the symbol for this. It does not symbolize the ideals of individuals, but rather a country who stands together in good times and bad. It stands for peace, stretching from sea to sea, and a symbol of the price that was paid to allow all of us here to have the freedoms we take for granted. It symbolizes the hope of how far our country has come, and how far we will go. The American flag is a reminder of the devotion countless men and women have had for each other to live in a country where we can express our thoughts and become what we want to be. Many have made the ultimate sacrifice to protect our country and what it stands for.

I originally approached the American Legion Post 89 about helping out with a portion of the cost for flags for the high school, about 60 flags. They went over and beyond, offering to purchase 175 American flags for the entire Pella Community school district. We cannot thank them enough for their generosity, not only for the flags, but for their service to our country.

Many people serve our country besides those in the armed forces. Our healthcare workers, elected officials, teachers, farmers, business people and many others all must come together to create our society. Thank you for what you do to make our communities strong.

I ask those in the American Legion Post 89 to please stand. Thank you for your generosity to our schools for being so willing to purchase flags for our district.