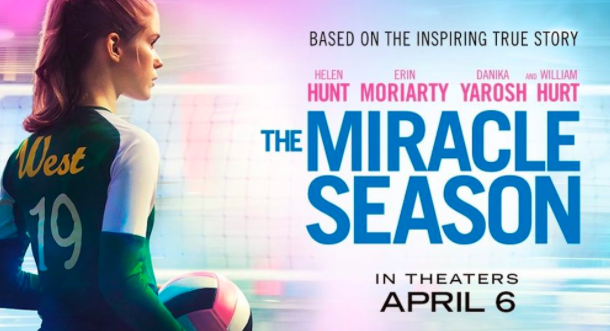 Courtney Paxton had an exclusive interview with Catharine Found, the sister of Caroline Found whose story is told in the movie Miracle Season. This movie is about a seventeen year old girl, Caroline, who died in a deadly moped accident in the beginning of her volleyball season. Caroline’s teammates have to work through their grief and still make their goal to go to state.

Q:  Could you tell us a little bit about your sister?

A:  Carlone never had any boundaries; she bent the rules a lot. She liked to “toe the line.” She never had any boundaries in terms of people who she was supposed to be friends with who she wasn’t or who’s cool and who’s not. She thought of every person as who they were as an individual. She didn’t categorize and didn’t make boundaries especially in high school. She was just a loud kid, and it made you feel good to be around her.

Q:  What did she love about volleyball?

A:  She liked the team aspect and being around different girls working towards the same goal. She was very good at cheering people up, and I think a lot of the time that’s what you do as a setter. I think that’s what carried her to be in the setters position because you’re essentially responsible for calling the shots and picking people up and knowing who’s doing well and who’s not and things like that. She just had a fire inside of her and that had a competitive drive that she enjoyed about volleyball. In Iowa it’s always nice to play volleyball because you can play it year round. I think she liked a lot of sports, but I think volleyball was one that she was surrounded around more and just around our high school. I played volleyball.  My friends played volleyball and things like that. Her friends also played volleyball. So it was just a combination of all those things.

Q:  What did her volleyball team mean to her?

A:  Caroline’s volleyball team to her meant she was the owner essentially. They were her pride and joy, and she took great ownership in that team. Their needs were her needs; it was her social life as well. She knew she was good at it, but she didn’t let that get in the way of what the bigger picture was which was, you know, doing well and having fun.

Q:  How did you feel when you heard they were making a movie about your sister’s life?

A:  I was a little hesitant because Hollywood, their number one priority is to make money on movies, and I know that. So, it was hard for me to want them to take my sister’s story, knowing they had a goal of making money in mind. But there were also other aspects that they were looking at too like sharing her legacy and inspiring other athletes. I just kind of had to focus on that and the whole concept. They were doing it for other reasons other than just for money.

Q:  Do you think the movie tells your sister’s story well?

A:  That’s a good question. I think the movie did a good job. The movie was based on a true story, but there were many things in the movie that weren’t true. Like for example, Kelly never had a boyfriend; there was no boy involved. There was never a time when the girls went against Kelly and talked behind her back, but rather the opposite, they really grew as a team and were very very close the whole time. You know, I think you could have made more movies and never gotten enough of my sister in it, but obviously I’m biased. They did so much filming, but they had to just cut it down to an hour and forty minutes or so. That’s just how movies are; you can’t include it all. But I think they did a good job. I think the audience could walk away grasping of a little bit of my sister’s nature and her personality.

Q:  What do you think Caroline would want her legacy to be?

A:  I think Caroline would not want her legacy to be, “remember me” or “remember who I am.” But, I think it would be more like, “do good for others.” “What can you do to make the world better?” She would want to inspire people not to dwell on her but to do better for the future.

Q: Is there anything else you would like to add?

A:“The girl who played Caroline in the movie, Danika Yarosh, came to hangout with me and my family in Iowa City and she had such a big personality, and she never wanted to stop hanging out with us.”